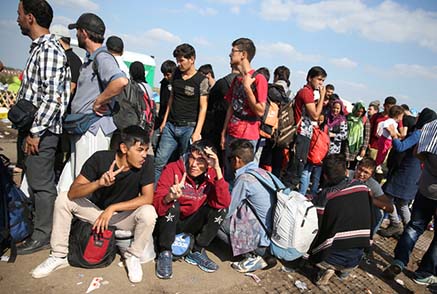 In Budapest on Tuesday, at the final event in the series „Stand up for Hungary!”, which has accompanied the National Consultation, Prime Minister Viktor Orbán told that „We shall not let Soros have the last laugh”.

Referring to the words of Minister of National Economy Mihály Varga on the question of whether the economy is successful, the Prime Minister said that „it hardly allows any other interpretation”. No one can deny the improvement in macroeconomic figures, he said, but criticisms are not dying down, as „we are not successful in the way that others want us to be”. The global elite wants Hungary to be successful, he said, but it wants to see itself in first place, with the Hungarians only in second place. The Government, on the other hand, wants Hungarians to be the main beneficiaries from economic success, and the global elite only in second place.

Mr. Orbán stated that as long as there are unemployed Hungarians, work must not be given to others. He stated that he does not share the view that admitting guest workers is good for the economy. He explained this in terms of cultural and collective attitudes, distinguishing between a situation in which the community owning a country does all the work – including the hardest or most menial – and one in which a country consistently looks down on certain work and, no longer willing to do it, „hands it down” to others. „If we want Hungary to be a strong nation, then we must first provide everyone with work, and we must value all kinds of work”, said the Prime Minister, who expressed his approval of the increase in the minimum wage.

At the final event in the political season, he also stated that today two massive historical issues are placing strains on Europe. The first is the problem of illegal immigration, which we are justified in calling modern-day mass population movement. The other question, Mr. Orbán said, is what future we are moving towards: the Europe of Brussels or the Europe of nations. He added that the stakes are high, and so both of these issues are exerting tremendous pressures.

„We are in the midst of two debates, the outcomes of which can determine Europe for decades – irreversibly, and permanently”, he said. He also observed that, apart from some countries, in Europe the unemployment rate is high, especially the young, and so far only a fraction of the immigrants have found work. He described the efforts of those claiming that solidarity demands the mandatory settling of migrants in all EU Member States according to a quota system – or even by creating migrant villages – as „the Everest of demented ideas”. Moreover, Mr. Orbán said, such people are now expecting cooperation from those countries whose opinions were never sought when it was decided to invite migrants into Europe en masse.

The Prime Minister said that he does not want to be involved in German attempts at the falsification of history, which seek to hold Hungary rather than Germany responsible for letting in migrants in 2015. „Multikulti” has been a spectacular failure, the Prime Minister said, and now they want all the EU Member States – including Hungary – to pay the price for it: they want to see migrants who were misguidedly let into the Western countries distributed among those countries – such as Hungary – which defended themselves and did not allow migrants entry.

He said that Hungary recommends that migrants are not distributed within Europe, but transported out of Europe. „We who want a Europe of nations are not Eurosceptics”, the Prime Minister stressed: „We are Eurorealists, who want to build the European Union on genuine, rock-solid foundations – not on sand”. There is only one such political bedrock, he added, and that is the reality of European nations: today that is the basis of the EU.

The Prime Minister stated that no nation may be given orders on who it should live alongside in its own country, as that can only be a nation’s sovereign decision. The illusion of mass integration has been shattered, said Mr. Orbán, explaining that in place of it parallel societies are emerging, with increasing crime, deteriorating public security, terrorist threats and terrorist attacks. He added that no one other than Europe itself can make decisions in the debates on the continent’s future. The Prime Minister pointed out that when he talks about Europe he does not mean Brussels or the European leaders, but the community of European citizens: from Athens to Helsinki, and from Lisbon to Sofia.

However, Mr. Orbán said, in the motherland of democracy he can see no one asking the people for guidance: „No one, apart from us, the Fidesz-KDNP government here in Hungary”. He noted that on five occasions since 2010 the Government has consulted the Hungarian people on the most important affairs of common interest. The Prime Minister stressed that as part of the latest consultation, completed on 31 May, six questions were asked in relation to Hungary’s national sovereignty: three on the migrant crisis, and three on economic issues. As there was agreement on all six questions, he said it can be declared that „there is almost complete consensus that we must protect the sovereignty of our economy and our migration policy from interventions from Brussels”.

The Prime Minister stated that the response to all six questions showed overwhelming support for the need to stop Brussels on the issues of the migrant crisis, the withdrawal of powers from national governments, and centralisation of power by stealth. The people had unanimously declared that the decisions concerning the Hungarian economy should be adopted inside the country, he stated: Hungary should continue to have the right to decide on taxes and energy prices, and it should not surrender these decisions to others.

Mr. Orbán said that the Hungarian people do not want to take in illegal migrants: „not a single one, not on a temporary basis, or on any other basis”. The Hungarian people unanimously want the Government to make every effort to protect the country against illegal immigrants, he added. Meanwhile, he observed, Hungary is punching above its weight in helping Christian communities in troubled regions. The Prime Minister noted that there is agreement that „we should not let illegal immigrants wander freely around the country, thereby giving them the chance to disappear from our sight”, but should keep them under supervision while the authorities assess their applications.

There is full agreement that activities which seek to assist illegal immigration – such as the popularisation of people smuggling and illegal immigration – must be punished, he said. According to Mr. Orbán, the Hungarian people cannot be deceived, and they understand perfectly well that many organisations funded from abroad are organising, supporting and financing illegal immigration, which means that „in fact, whether intentionally or not, they operate as the Trojan horse for illegal immigration and ensuing terrorism”.

This fact, he said, is recognised not only in Hungary: in Italy this is now being discussed openly, and in other countries it is also becoming increasingly difficult to conceal the fact that the people smugglers and the non-governmental organisations assisting illegal immigration constitute „a collective mafia network”. He added that it is understandable that the Hungarian people want to know who supports these foreign-funded organisations.

He stressed that respondents to the questionnaire were effectively in full agreement that the Hungarian people should not transfer control to Brussels; they do not want to surrender any more powers or any competences other than those specified in the original treaties, in the accession documents. Hungary defends the European acquis, and it is a strong and proud European country which stands up for its opinion and interests, he said, adding that Hungary wants the original European Union: the EU of the founding fathers, rather than a „Brussels kingdom”. But where a kingdom is being built, he said, in the background there are always kingmakers. Mr. Orbán pointed out that now, too, in the background there is one such „determined and successful money man who thinks himself a superior being”, and „unfortunately, he happens to be Hungarian”: his name is George Soros. This is someone who has a plan, the Prime minister said: he wants one million migrants coming from a different cultural background to settle in Europe every year; this would be achieved by force, if needs be – even against the express wishes of the European people.

Mr. Orbán remarked that if Mr. Soros really wanted to help, he would take his money where it is needed, but George Soros „is a speculator operating an extensive mafia network, who is threatening Europe’s peace and future”. For him migration is a good business – and it would be even better business „if we stopped resisting”, the Prime Minister explained, adding that „The reason he is so angry with Hungary – and me personally – is that we stand in the way of his grand plan and his grand business project”. Mr. Orbán said that in the past „we were not bothered by him being under the same roof”, and would have long remained placid if he had not veered onto dangerous ground, if he had not announced his migrant resettlement programme, if he had not started financing organisations transporting in migrants, and if he had not supported the mafia network of NGOs and people smugglers. The Prime Minister stressed that this is now an issue of national security, and when it comes to the security of the Hungarian people, Hungarian families and Hungary, their security today and tomorrow, „as far as we are concerned there is no compromise”: there is only law, power and defence.

The Prime Minister said that today George Soros is giving the leaders of the EU instructions on a number of issues, and they are „bowing before him”. The infringement procedure on the migrant quota issue was also launched under his orders, said Mr. Orbán, who remarked that „what matters to us is the strength of arguments, rather than the origin of the person who makes those arguments”. Everyone, he said, is familiar with the Government’s position: zero tolerance against anti-Semitism; the Hungarian Jewish community is under the Government’s protection, and „as long as we are responsible for law and order in this country, they can always rely on our protection”, he stated. He observed that the very people who are accusing the Government of anti-Semitism are themselves transporting anti-Semitism into Europe together with migrants in contingents of tens of thousands.

The Prime Minister said that there is a „hot autumn” in prospect, and there will be further tough battles – especially as the general election is approaching on the horizon. George Soros will do everything in his power to install a government in Hungary which „dances to his tune”, which dismantles the fence and which opens the borders to illegal immigrants, he said. He pointed out that the seriousness of the situation is amply demonstrated by the fact that he has even caught Jobbik in his net.

Mr. Orbán stressed that after the National Consultation, the task of the Government is to maintain its calm, to recognise the moral soundness of its policy, and to remain self-confidently aware of its strength. „We are on the side of the Hungarian people, and the Hungarian people support the Government against Brussels and Soros”, he remarked, adding that the Government shall not let George Soros have the last laugh. The Prime Minister closed his speech with his customary words of encouragement: „Go for it Hungary, Go for it Hungarians!”

(Cabinet Office of the Prime Minister/MTI)